SUMMARY OF THE APC/1/2016: AFOLABI GABRIEL OLUWASEYI & 9 OTHERS Vs. BGL SECURITIES LIMITED & 22 OTHERS

The Commission received several complaints against the 1st and 2nd Respondent over failure, refusal and/or neglect to liquidate their investments in both the Guaranteed Consolidated Notes (GCN) and Guaranteed Premium Notes (GPN). Upon investigation of the complains it was discovered that the indebtedness of the 1st & 2nd respondent to the complainants stood at ₦2, 184, 474, 991.65 (Two Billion, One Hundred and Eighty Four Million, Four Hundred and Seventy Four Thousand, Nine Hundred and Ninety One Naira, Sixty Five Kobo). It was also revealed that act was carried out through the 3rd to 23rd respondents.

In a bid to obtain justice for the complainants and grant all parties fair hearing, the matter was presented before the Administrative proceedings Committee (APC) of the Securities and Exchange Commission (SEC). Upon confirmation that all parties to the matter had been served hearing notices, the SEC APC sat and heard the matter on February 6, 2016. During the proceedings testimonies and documentary evidence were tendered by various parties.

Upon conclusion of the proceedings, the SEC APC arrived at a decision which has been approved by the relevant authority. The decisions of the Committee are as follows: 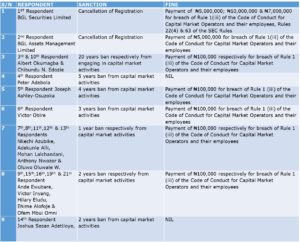 DOWNLOAD>> THE DECISION IN THE MATTER OF THE INVESTMENT AND SECURITIES ACT 2007: BEFORE THE SECURITIES AND EXCHANGE COMMISSION ADMINISTRATIVE PROCEEDINGS COMMITTEE (SEC APC) HELD 3RD FEBRUARY, 2016